Each year, students from across the globe travel to Texas Christian University’s (TCU) Richards Barrentine Values and Ventures© Competition to pitch ideas for conscious capitalism ventures that turn a profit while solving a problem. 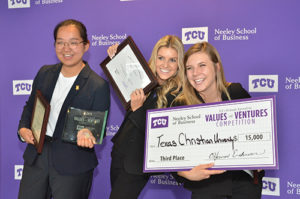 The two-day competition, annually presented by the TCU Neeley Institute for Entrepreneurship and Innovation, produces nine winners, three special-place awards and six awards for the Elevator Pitch, with prizes ranging from $500 to the grand prize of $100,000 to launch companies. Since its inception in 2010, more than $1.2 million in sponsorships and in-kind support and $600,000 in cash prizes have been awarded to more than 138 competing universities. From the competition, 160-plus companies have been launched; 66 are fully operational.

Winning companies include innovative practices such as Spring Back Recycling, which employs disenfranchised and homeless people to deconstruct and recycle mattresses to reduce waste, W.E. Do Good, which provides a low-cost, human-powered machine to improve agronomic practices and reduce poverty in Ethopia and other countries, and the most recent winner, Celise, which produces biodegradable alternatives to plasticware and straws made with cornstarch and almost identical in feel and performance as plastic.

“A lot of people think business ideas are just about making money, but there are a lot of us out there that want to do a lot more than that. We want to make more than money; we want to make a difference … With the Values and Ventures Competition at TCU, you do well by doing good,” says a TCU student in a video describing the competition.